Christina Kotsopoulos is originally from Toronto, Ontario, where for 14 years she trained extensively at a competitive level at Vlad’s Dance Company. Starting from a very young age, she had the privilege of working with many prestigious choreographers in both the commercial and concert dance settings. Christina’s film and television credits include programs such as Pop IT!, Lego Girls, The Next Star, and Backstage. In 2014, Christina moved to New York City to study at SUNY Purchase College Conservatory for Dance. Here she had the pleasure of learning from many brilliant teachers such as Stephanie Tooman, Doug Varone and Kevin Wynn. Additionally, she had the chance to perform a solo excerpt from Kidd Pivot’s repertoire choreographed by Crystal Pite, set by Cindy Salgado. In 2016, Christina was chosen to study abroad in Amsterdam, Netherlands for a semester at Academie Voor Theater en Dans in the Modern Theater Dance department. Christina graduated with her Bachelor of Fine Arts with Honours in May 2018. Soon after graduation Christina joined Broadway Dance Lab, directed by Josh Prince, working with many different choreographers on a selected process. Christina is currently a freelancing artist based in New York City. Everyday Christina strives to push past her comfort zone and continues to pursue her dreams by trusting the process! 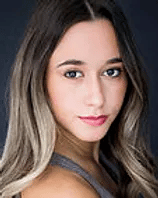