Most recently, Daniel was a cast member of Rosta Thomas' "Bad Boys of Dance" and the broadway musical "Hairspray" on the world's largest cruise ship, Royal Caribbean's Oasis of the Seas. Some of his past performing credits include: "Footloose" at the Carousel Dinner Theatre in Ohio, choreographed and directed by Emmy Award winning and Tony nominated broadway choreographer AC Ciulla. Daniel has also performed in the first national tour of "The Music Man" with original choreography by Susan Stroman. He performed in Atlantic City for two consecutive years in the broadway review productions entitled "Nights on Broadway II & III" at Caesar's Palace. Daniel's industrial/TV appearances include: major events for Volkswagen Germany and Walmart, as well as the Macy's Thanksgiving Day Parade. He can also be seen on television screens in Spain for the Spanish National Lottery. Prior to Daniel's professional career he held numerous titles, including 'National Outstanding Dancer' for New York City Dance Alliance! He was also a recipient of Broadway Dance Center's Richard Ellner Scholarship. 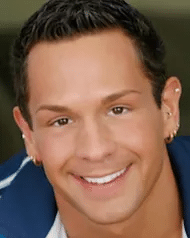